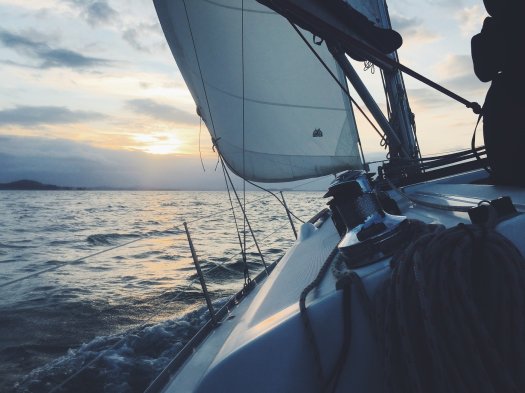 Something I’ve noticed about small kids: They operate in the particular.

On an evening last week, Andy arrived home and asked Ellie to get involved in the clean up of her toys. He had promised to take her out for dinner but our place was a disaster and we had some time before they had to leave. So he kept saying over and over again:

Ellie wasn’t picking up on what we were after. She’d say, “OK! I want to go out to eat” and then a few minutes later as we were all jumping into our respective chores I’d notice that she would get distracted. She’d move a toy from one side of the rug to the other. At times, she’d scatter objects around, making the situation worse. She didn’t seem to understand that the clean up process starts with putting one toy back where it belongs, and then following that up with another one, until all the pieces are put away.

I’m thinking about this very concept as I consider 2019. Or maybe I’m just asking for this small situation to shed some light on a really, really difficult year.

On January 1st, 2019, I was clear on my marching orders for the months ahead. God had thrown the word “faithful” in blaring lights on our path and I felt, albeit cautiously, that I knew what he meant. I wanted to believe that he was saying HE was faithful. That we hadn’t gone down this road for nothing. So beginning in January I forced myself to sing songs about faith and faithfulness, while heading into the new year with a timid and uncertain excitement.  I could feel there was something off about my interpretation, but I didn’t know what that was. Maybe if I sang about God’s faithfulness long enough, we could finally get to the things that I’ve really wanted in life.

This is kind of ridiculous in hindsight. I’ve never really believed in a God that caved to my every whim when I wanted it. I don’t think I could trust such a deity and frankly, most days I don’t really know the particularities of what I really want anyway. Which is why he has used the particular moments of this year to turn this call to faithfulness back around as our year has come to a close.

In February, we welcomed our son into the world. His birth story had its own challenges but his arrival was right on time and just as joyous as I remembered with our daughter. What a gift. He was seven pounds, seven ounces and has been such a fun kid to get to know. As wonderful as those first few weeks were, it didn’t take long for the hormones to settle down and the sleepless nights to follow along. Things get particular pretty quickly when an infant and his toddler big sister have continual and immediate needs for their sleep deprived parents.

We were just coming out of a summertime funk related to the stretching of our parenting muscles when my mom called to tell me she would be admitted to the hospital with pneumonia. Within two weeks her treatments would fail to stop pneumonia’s progression into her other lung. A few hurried round trips to Virginia and back had Andy, my sister and me sitting with her doctor for a very tearful conversation about the death process. What a complete and unexpected shock. We would now be required to help her home. What an ultimate particularity.

I don’t know that I have many developed thoughts on the death of my mother at the age of 64. I know that I wish she could have spent Christmas with us as she had planned. I know that on most afternoons I want to Facetime with her and the kids. I hadn’t realized that this was a common ritual of ours until I couldn’t do it anymore. She always had something up her sleeve for her grandkids, even if only an afternoon chat over the phone. I know that I cried through the Sound of Music while watching it with Ellie over Christmas break. We watched Maria sing on the hilltops of Austria over and over again as children. It reminds me so much of that beautiful season between two kids and their beloved Mom.

I suppose I am learning about the particulars of a loss. They are not insignificant.

As 2019 comes to a close I consider the word “faithful” and realize that it has not so much been a word about the Lord as it has been a call to me. To keep my eye on the prize in and through the particularities of my life. We are called to this because we follow a God who is already faithful. The scriptures tell us it is his nature and my experience shows me this too. And so we clean diapers at 2AM and clean the dishes for the thousandth time because we are committed to the story that God is telling through and around those very things.

Last week, with frustration building around the ambiguous “clean-up process” that was unfolding in our home, I pulled up next to Ellie who was getting frustrated too.

“Lets put the Legos in the box,” I suggested, and she began to finally engage.

“Lets put these books in the basket,” I said next.

Soon, she got the hang of what we were asking for and with a job well done she, Andy, and Ethan headed out for Atlanta’s finest chicken nugget and waffle fry dinner.

We are a generation of people that want big things: Justice, Community, Peace, Joy. It appears these things start with a commitment to follow a faithful God in the particular paths he has prepared for us. What a great reminder that he can and he will show us the way forward. I don’t know about you all but I have big hopes for this next decade. Can we hope for the “Roaring ’20s?” I think so! If the 2010s taught me anything its that we can avoid getting blown off course by keeping an eye on the map, or tending to a busted sail. Let’s keep alert. Let’s stay attentive:

“He who calls [us] is faithful; he will surely do it.”