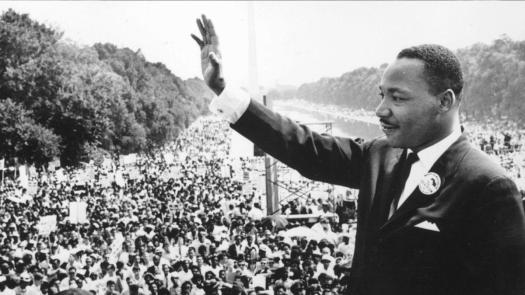 Today, Atlanta is celebrating the 50th anniversary of the funeral procession of Martin Luther King, Jr. I love this city, I really do. I spent Friday afternoon with my kid at the Carter center and then considered last night how I might join a march with the King family on the anniversary of his death (sadly, sickness and rain kept us home). I’m remembering that this city is a place where so many good things have started (with King). And continued (with Carter, among others).

I found myself wondering along with the nation the other day what Dr. King’s death accomplished, if anything. I don’t know that I am qualified to answer that question. I should probably ask my black friends for their opinions. I do think Dr. King and I have some things in common. We both have dreams for better lives. We both believe that this can happen in response to the invitation of God in his work where “every valley shall be exalted [and], every hill and mountain shall be made low (to quote King, who quotes scripture).”

I remember the exact day in my college career when I realized I wanted something different. I had decided on a business degree because it was the logical choice for someone who would graduate with student loans. I sat in a downstairs classroom of the Sellinger Business School as my professor passed out slips of paper that had a company name on it. We had split into groups and would prepare a marketing plan for the company that we were assigned at random. My company?

Now…I love me a good razor. I am personally glad that there are people in the world who work at the factories that make them. I suppose I’m even grateful that someone markets those razors to my local grocer so I can buy them with ease when I need them.  But I’d be lying to say that on that day my heart didn’t sink. After 17 years of school I found it somewhat demoralizing to realize that I might just finish it all to go sell razor blades. Not when I knew that there were people not one mile down the road from the classroom I sat in that would walk past our campus and consider attendance at a school like mine an impossibility. A literal dream scenario.

My momentary exasperation would eventually lead to hope as I learned just how badly the not-for-profit world needs people with business degrees. I’ve ended up putting it to good use in my career. Yet that day may have just been the moment when my life would take a turn that I didn’t expect. It didn’t totally connect with me that the desire to do kingdom work often comes with a cost.  For King it was the ultimate cost of his life. For us, its been a much slower march to certain goals than I had ever anticipated.

A surprising thing about life, for me, has been how hard it is to go after what you want. As children, people will ask us what we want to be when we grow up and we’ll say “a doctor!” or “a firefighter!” or “a ballerina!” not realizing that the process required to do those things and still keep food on the table can be incredibly difficult. People will tell you, as they told me, that it all requires sacrifice and I will agree wholeheartedly with them until the moment comes for me to actually give up on something. Even if just for a a bit more time. Its then that I start to get suspicious that I’ve been led into a bait and switch, though that couldn’t be further from the truth. I have been told all my life that I can go after what I want AND i have been told that it would require sacrifice. I just never really understood what that really meant until those two realities came together.

Which brings me to my weekend and a dream that I had. This weekend I pretty much busted at the seams as I realized that some things that I’ve wanted for our family are just taking longer to realize than I ever imagined that they would. Sometimes it feels like your dreams are just getting lost in the shuffle and you lose your cool. Sometimes, to my absolute surprise, I make certain desires ultimate things without even realizing it. I’ve put them there because the culture I’m surrounded by has put them there and told me that I’ll be able to say “I’ve made it” once I check off these boxes.

Which brings me to a dream I had on Saturday night. I dreamed that my sister was getting married. Kristin was beside herself that she was heading down the aisle. She couldn’t wait to get married and I, as her matron of honor, was just as excited for her. The only problem with this wedding day was that little things kept going wrong before the ceremony could start. I was supposed to hold onto the engagement ring and I had somehow misplaced it. Kristin’s dress had torn and she was forced to wear a black t-shirt on top with her bridal gown’s skirt on the bottom.

Over and over things would happen that were culturally problematic though I suppose not functionally so. You don’t technically need an engagement ring to get married. You can in fact get married in a torn black t-shirt and a white skirt, though perhaps you’ll be thought odd. Over and over in the dream I would finally get up the courage to break the news to my sister about the problem at hand and each time she would laugh and figure out a work around. Each time she would remind me that she just wanted to walk down the aisle and nothing could really get in the way of her excitement over that.

No sooner would I start to laugh ever so hesitantly with Kristin who could have cared less would someone pull me aside and say: “you’re not really going to let her walk down the aisle without her engagement ring, are you?” or, “We can’t start the wedding until she has a new gown. You can’t go down the aisle in a t-shirt!”

So when my sister was excited to walk down the aisle, regardless of the particulars of how that ceremony itself would play out, she was responding to the call of her life. She was saying: “I don’t care how this all plays out. I just want to walk towards the love of my life!”

While I should have been celebrating and laughing with her I found myself pulled by a culture that said I wasn’t doing it right. Which is kind of ridiculous if you think about it. I’ve never been to the same wedding twice. Which is to say, everyone has a different path down the aisle. So what do we do when we recognize we’re being pulled from the celebration? For good or for ill, here’s what I did:

I intentionally reflected on it all and found myself thankful for the grace to see that I was torn. The night prior I had been certain that I was right as I hammered home a new plan of action for us all and you couldn’t have told me otherwise. But this dream set me straight. I apologized to God (and to Andy!) for believing that he was intentionally withholding from me. Then I couldn’t help but marvel at the fact that God would allow difficulty in my life to expose what keeps me from the expectation of the best things for us. Lastly, I asked for the faith to believe that he is already working to provide the next piece of the puzzle that is a part of our journey.

Martin Luther King, Jr. was ultimately killed for daring to dream of and speak for a better world. I wish like hell it didn’t take his death to shake us awake. Yet 40 plus years after his death I sat in a classroom one Tuesday before college graduation and realized I wanted to be a part of the feast that he, and the scriptures he tried to live by, were inviting us into. This didn’t happen in a vacuum. It came after learning about him over and over again and going on trip after trip to engage with folks who’ve had different American experiences than I. I ultimately realized I could go get a corporate job that probably paid really well but left me spiritually empty or I could hold out for a position that stirred up my heart for more partnership with God. The jobs that have pulled that out of me the most have been my roles at Habitat for Humanity and my role as a mom.

I don’t think this leap was insignificant. Taking a position that makes $30,000 a year so that economically distressed individuals can become first time homeowners is not necessarily the best investment of a 17 year private school education. At least if we’re just looking at the numbers. Staying at home with a child is even less so! But at Habitat and in this season with Ellie I see echoes of what the feast will be like in ways that I’m certain I would not have seen as a corporate marketing executive. People who were unjustly kept from opportunities for home ownership finally had the barriers removed. Seemingly insignificant things are inviting great wonder again. While my hopes for the future are taking longer to come to fruition I find that the difficulty makes their eventual appearance that much sweeter. So today I remember the dream of Martin Luther King, Jr. and am encouraged by the city I live in to keep figuring out ways to live out his vision. He was not a perfect man but I know this one thing about him: he tried to show up peacefully and make space for everyone to sit at the table. I hope to follow his lead.

The full text of Dr. King’s speech is here. I can’t recommend reading it enough!